The process of the video took two days in total. The first day was for early preparations and arrangements, including costume, site, light and makeup, etc. And the actual shooting together with other product process like post-production cost another day.
It was done during the time in the Chinese-British workshop in 2015. We wanted to express the spirit of laugh. Anything that can possibly trigger happiness is involved. It could be as small as the color of the rainbow, the dinosaurs in the childhood memory, a tiny flower or even the ants you once stepped on.
Coupled with current cognition, we integrated fashionable elements and those things that would make you happy including childhood memories and fit them all into this short film with live shooting and 3D techniques . The workshop only give me 3days in total.The first problem I met was the costume, so I contacted lots of my friends from different colleges, such as textile college, to borrow the costume.

Next step was to preserve the essential facilities, photo studio and Green Screen. If we had enough time, we would have rented more green screens combined together so that actors can move in a wider range for better effects. LEARNING HOW TO USE LIGHT BOX

The light box which is in the photo studio is expensive,thus,we have to lean about the full of functions，so that we can work efficiently AMBIENT LIGHT
We prepared specific stickers on the covers of light box. As for colors, we decided to create the gorgeous atmosphere for laugh in the video by using red, blue and green.

I`m voted for the teamleader,I was in charge of multiple tasks. I controlled the rhythm of the product and the schedule of all sites. In the meanwhile, I needed to shoot the video, produced the light effects, set up lights and worked on film clips and consolidation of post-production.

Due to the limitation of crews and props, we all acted as models. As the director, I also took the job of script supervisor and dispatcher. We were thankful especially for Ke Wu’s assistance along from makeup to model acting.

STORY BOARD
The story board was lost and in order to save some time for later use of the studio, I had to draw the scripts for them in five minutes. There was still much to do after the shooting. First, we scratched the green screens. Then we filtered the materials scene by scene, comparing with the story board. At the same time, according to the story board, we made the 3D model which appeared a lot in the video. Finally, we put them together and edited the whole video.

The scene represents the field of childhood memory. It was me standing in the field, giggling and flirting. PROCESS
This is the first scene, which shows the main visual element, the field, as a sign of freedom. It also leads to the story. BACKGROUND
Here we want to make the audience get a sense of how fast time flies. The light in rear travels like time machines.

Dresser made a guest appearance.

The scene expresses a word we brainstormed, riding. We all dreamed to have a steed when we were kids. ANIMATION
This part of animation was for the steed,I made the key frame to let the steed acrossthe light in the 3D scence in C4D. The scene deliveries the feelings, like missing, that someone immerses in while waiting for his/her lover in the field, blown by breeze.

The ornamental flower on the model’s shoulder was cut by us so it was a bit crude and hard to fit tightly with pins.

The following two scenes show the idea of conversation among us. Now that the social network is so developed and convenient in mobile devices, people rely too much on such electronic devices and tend to overlook the importance of face-to-face conversation, which works in a way to bring happiness and release the pressure. After we use the hair drier to produce the winds,the studio was like a construction site.

THE SEVENTH SCENCE
"We put the elements that we are delighted to see and hear, horses for example. We felt so happy when we were about to ride a horse or even just to play swaying cars." "There a bug while we are processing the green screen，we didn`t have enough time to post-production due to the restriction of time."

"These two scenes convey the happiness we enjoy when we are smug in the morning, fixing our hair in the mirror. And the happiness we gain when throwing cakes against each other or painting on other`s faces with cake in a party."

"The scene has an underlying meaning. It implies that everyone has put tags on selves and others. The story board contains a script that shows what the world would look like if all the tags were erased."

"When some muffle your eyes from behind, doesn`t it feel thrilled?"

"When shooting,we found she have special eyes." "Materialized elements such as windmills, combined with the colorful texture, express the joy of childhood."

PROCESS
"We have all shared a scenario where our parents bring us out to fly kites. The elements here are extracted from the image of kite."

"Our dreeser who also has a different temperament."

"Toy dinosaur was a thing which could make us smile when we were children."

"this part of animation is making the dinosaur rotate and combine with the film."

"I want to add more elements which contain both fashionable and pop styles." "I believe that we have all wanted to see a real volcano in our childhood. If such volcano exists, it must be able to activate the joyful memories back then."

"This movement is a little ridiculous，because I want to this film becoming more (friendred)style,I want to show the personal
style in all of my work."

"The phrase, step on volcanos, was derived from games we played in early ages such as “one, two, three wooden”and some “step on foot” games. So, following such idea, we finally came up with this funny and intriguing picture of "step on volcanoes".”"

"The volcano was iterating for several visions during rendering. The following three were picked from all the iterations."

"Sometimes happiness is staying together with other people which leads us to talk about anything."

"The animation here is the red circles moving in the frequency of laugher as if water is flowing."

PROCESS
"It was hard and troubled in post-production when we tried to match the heads since there were a lot of heads and we must match each head with a circle." "Sometimes, happiness is gained when we are alone, doing whatever we want to." 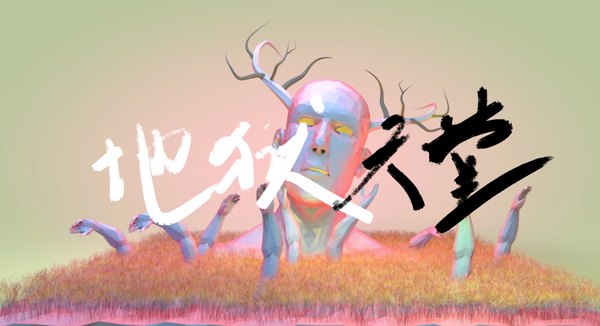 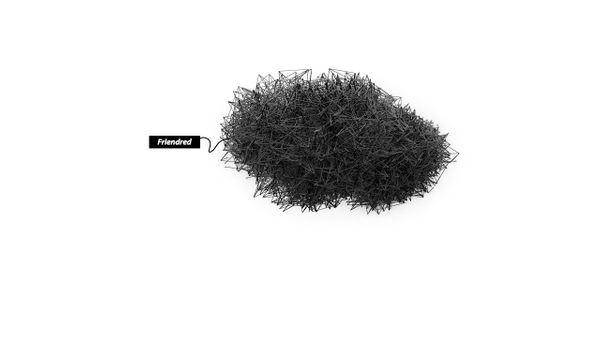