Nature is nobody - Nature inherently deserves respect - How to respect something that does not belong to anything/body? When you show respect to nature with your body, you will feel respect with mind #####INSTALLATION Evokes the (respectfull) conversation between nature and human Respect is very personal and subjective. Respect seems to be like a boomerang in the sense that you must send it out before it comes back to you. Respect is also an expression of accepting a certain trait or setting of traits demonstrated by that person. We tend to respect those who own the qualities or traits that we appreciate. So, respecting a person or not comes naturally. It becomes more difficult when we translate this understanding of respect to nature. How to respect qualitities that are ‘from’ nobody? We belong to nature, but nature does not belong to us. The environmental wisdom worldview holds that we must respect all life forms not as a means to human ends, but because they're inherently deserving of respect, but how to start this conversation? Confucius believed there was a natural harmony between the body and mind and therefore, whatever actions expressed through the body would be transferred over to the mind. What one does to oneself has an impact on the mind. Building on this theory, we believe that our installation can evoke a respectful conversation between human and nature by triggering embodied actions that transfer a feeling to the mind. ##### TEAM MEMBERS

During the two weeks’ work in Chinese-Dutch workshop from May 10 to May 22 in 2015, with the interaction of cultural ideology and the communication from various regions, there was surprisingly no language barrier. We shared a common goal and finally presented the installation on May 22, 2015.

In a brief summary, I have mixed-feelings. Starting from the incipient brain storm, idea construction and presentations every day, we all wanted to present the satisfactory products to help people understand what artists have in their mind. It was my second time to attend the workshop. Actually, the thinking model of foreign students was quite different from ours. As the leaders of the team, Manong and I sometimes had disparate thoughts. But such intellectual conflicts benefited the team. We still enjoyed the time together. Two weeks were ephemeral. And we spent most of the time on brainstorm or making models. We had to stay up all late sometimes or we were so fatigued that we fell asleep in the couch or just on the floor. Now that I recall, it was sweet and exhilarated. On our last presentation, one of the LED transformers was broken but it didn’t affect the concept we were to deliver. We have all contributed to the project to our best in two weeks. We were immersed in the process in which we collected ideas, chose materials, established the models and finally showed it in the exhibition. It was a journey we took to share our artistic thinking as well as making valuable friends.

But if you are too close, closer than the safe distance, the nature will respond with thunderous warning and lights to drive you back. Since there is a respectful distance, beyond which you will be required to return because the nature will be disrupted otherwise due to your intervene.

The poster took me a whole afternoon. What I wanted to say on the poster was that the nature did not belong to anyone, which was the way we needed to show some respect to the nature. Distance was the core concept in the design. Thus we used two people to demonstrate the relationship and it was indeed complicated. If the two shared longer distance, they might be strangers. If the two shared shorter distance, they might be relatives or lovers. Overall, we applied such fantastic concept of distance as analogy to respect.
INSPIRATION

We try different way to think about “nature”. WHat’s nature represent for? 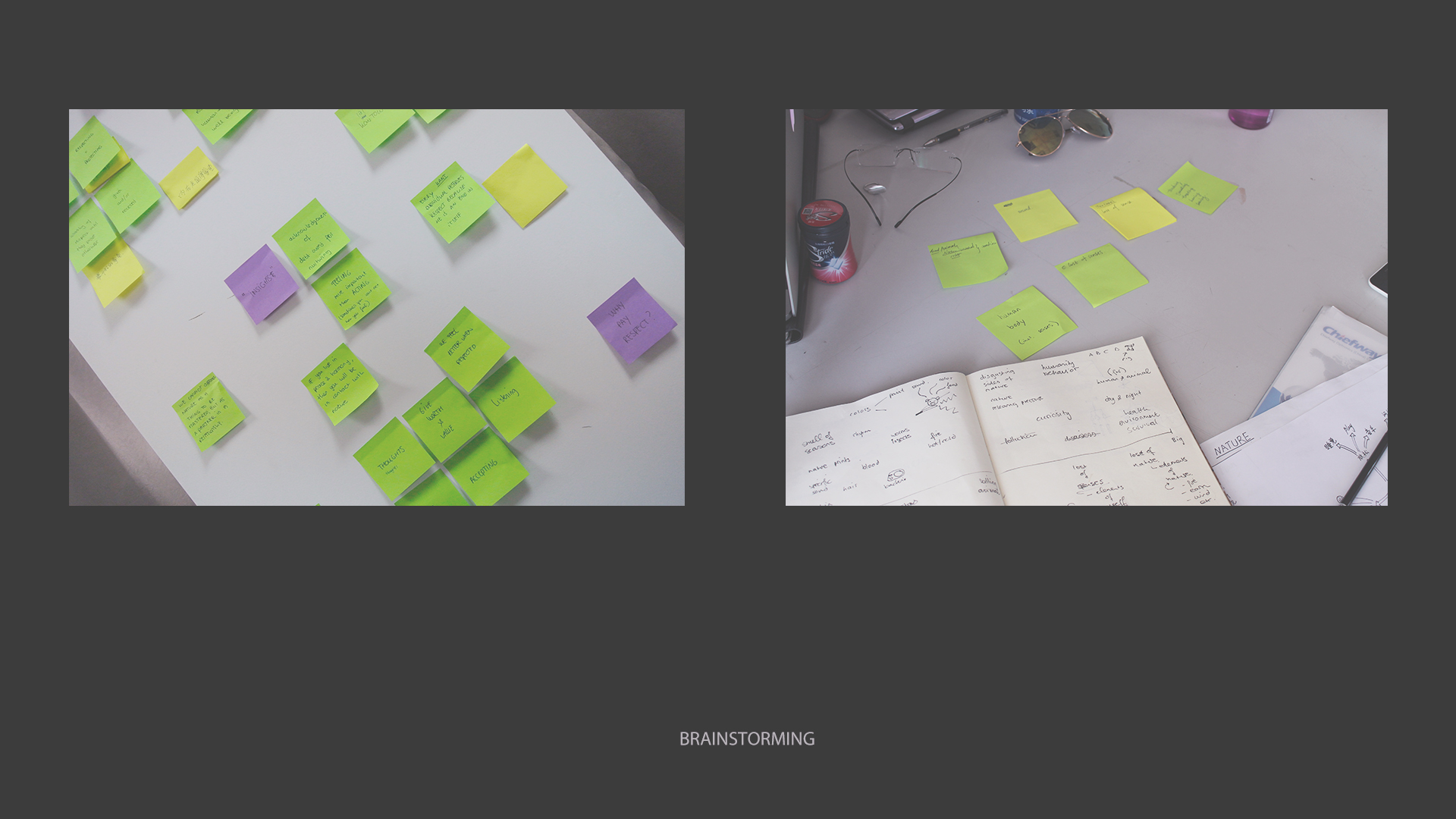 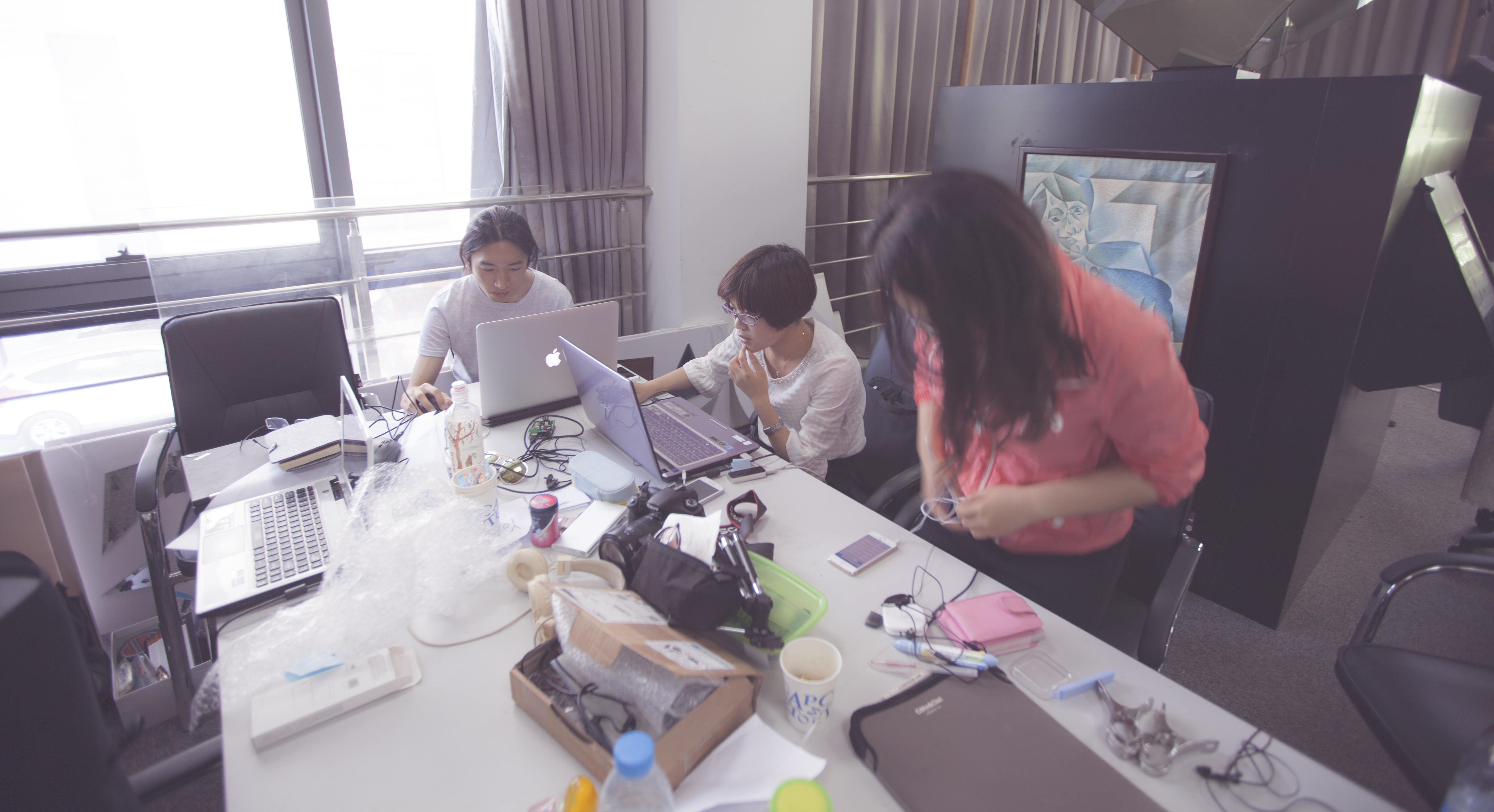 This is a process that everybody is more familiar with each other at the beginning,which can boost the efficiency 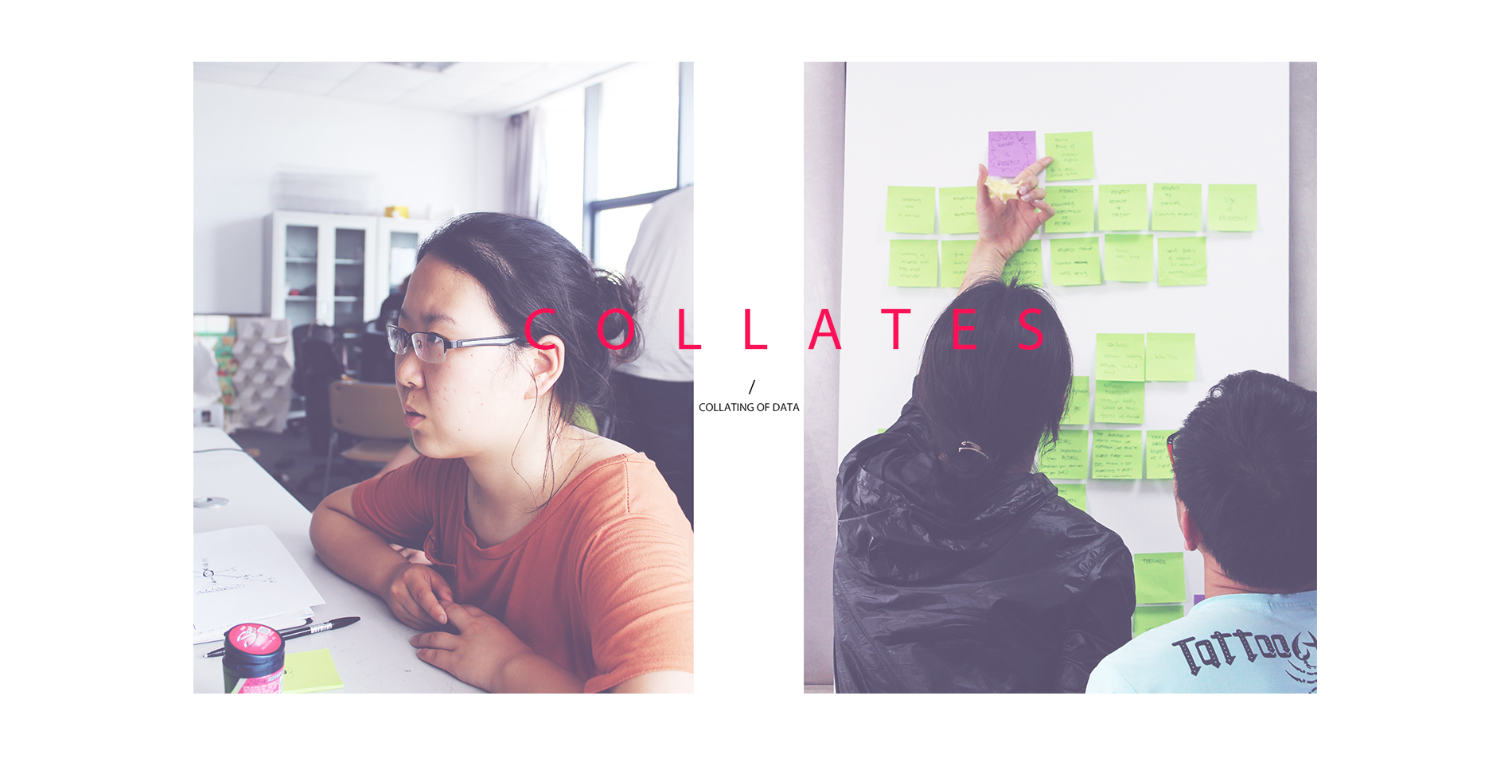 Confucius once said that physical behaviors are connected and resonant with brains. If the brain makes a conscious command, the body will react accordingly. On the contrary, if we make audiences’ bodies move first, they will be able to realize what they are doing. Therefore, in light of such a thinking model, we want to set a plot in which audiences are led into a sense of respectfulness before approaching the device. 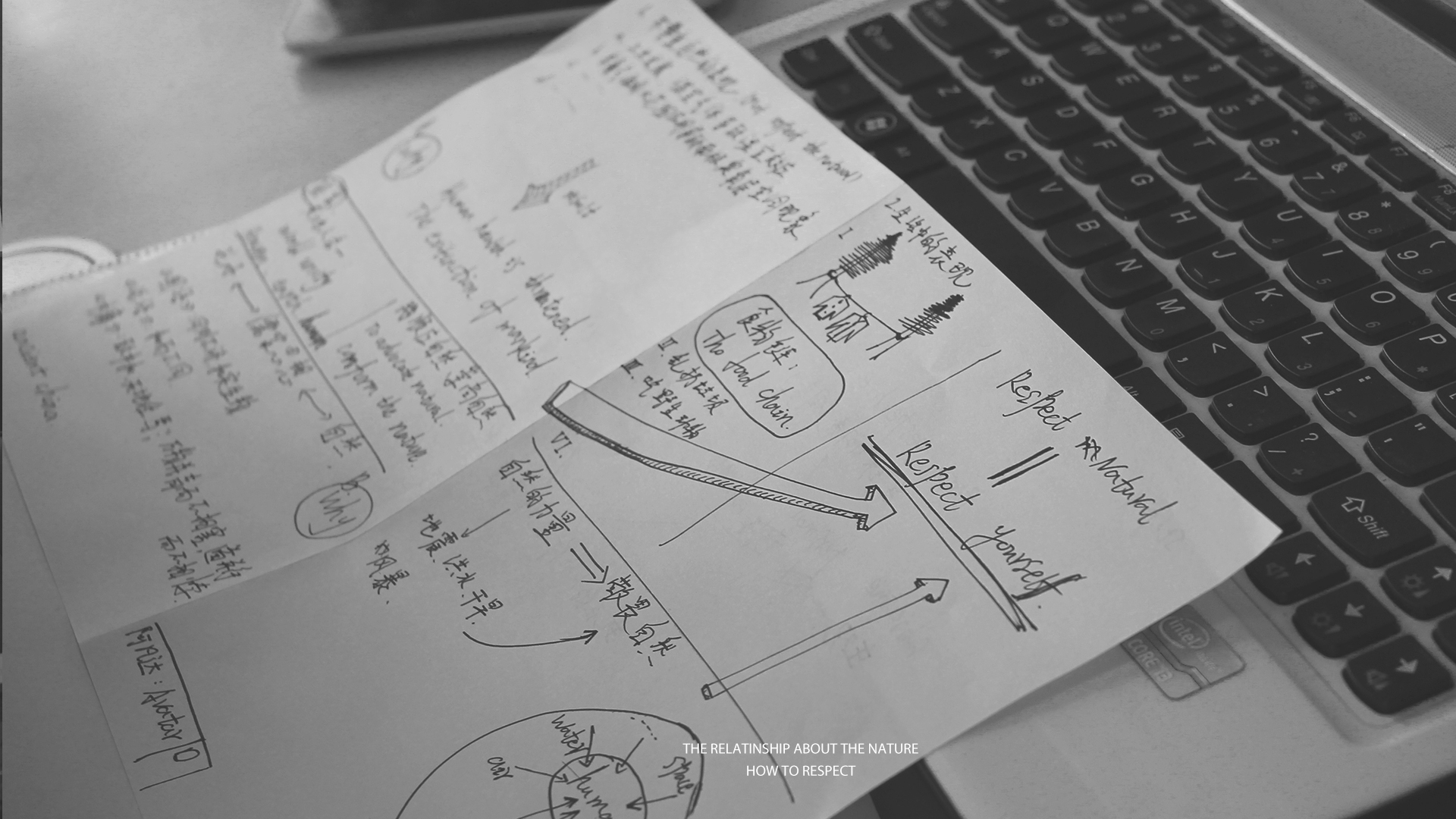 We learn knowledgy about the combination of software and hardware 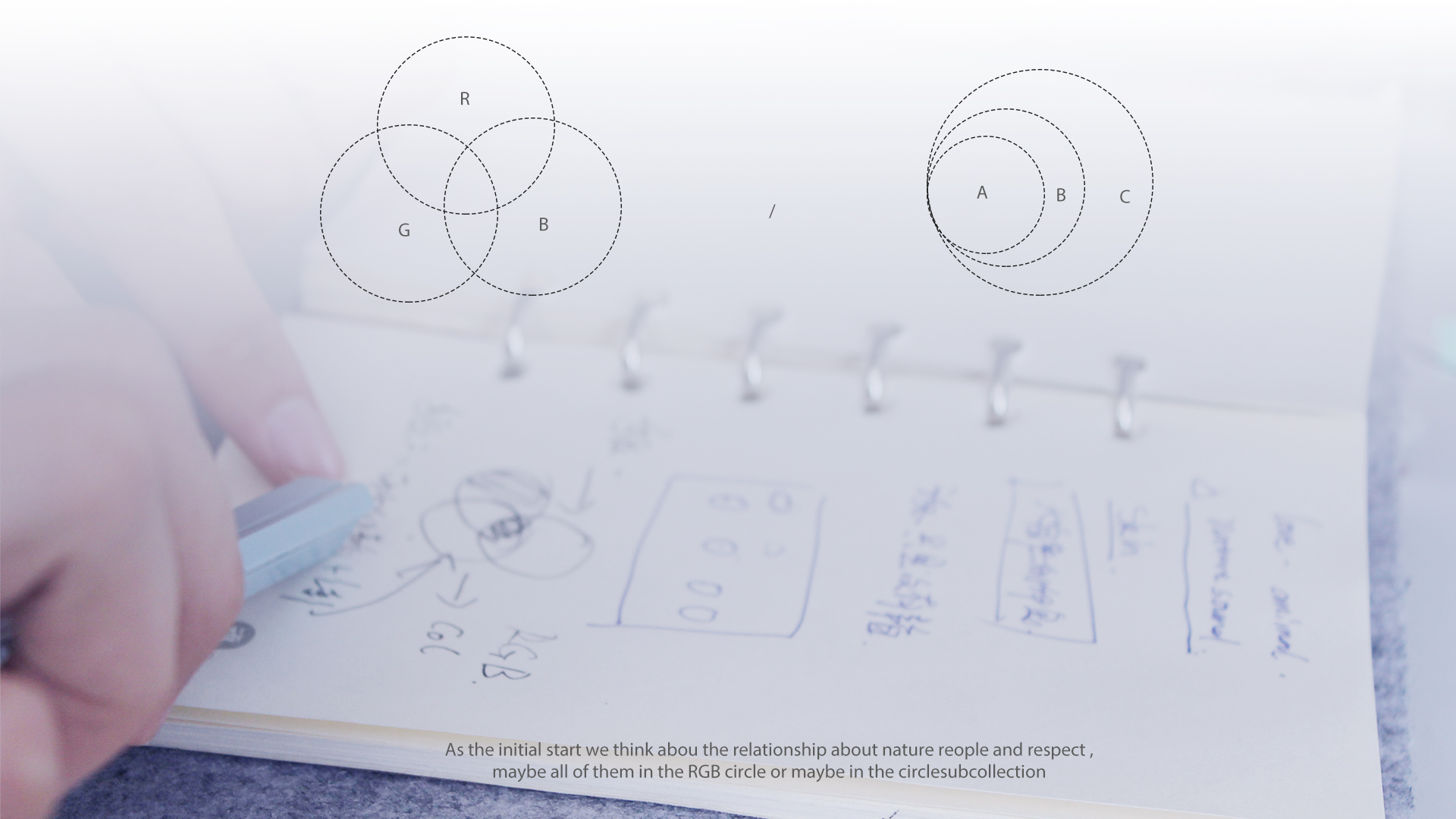 I got the feedback from the teacher that we should totally understand why nature is nobody and why nature deserves respect,as well as what is the relationship between the nature and us?

Then I draw a diagram to illustrate. We thought that the relationship between human beings and the nature was like the RGB curve. Each word in RGB represents people and the connection among people is exactly the merge of nature in our lives. It was us who made up the whole nature. In later summary, we categorized the nature as an entirety and humans as a part of it.

After several discussions and modifications upon the topic and routines, we decided not to blend in too many interacting means in our installation because too much such interaction makde it a puppet but not the real one. We were dedicated to deliver the concept directly to participants in an active way instead of a passive and mechanical way. In order to do so, we even wanted to set some fireflies at the exhibition to build an atmosphere of ecological system. ![**](/content/images/2015/08/STAGE-SET.jpg) Taking the advantage of the space of the exhibition, I found that the distance sensors fitted the corridor-shaped gallery well. And it coincides with the approach to expressing the nature with respect and with the attempt to express the nature through respect.

We collating of data which we left

Which point do we need to show to the audience ?

We also have to think about the material budget

And the schedual we must keep in our mind.

The relationship of nature and human 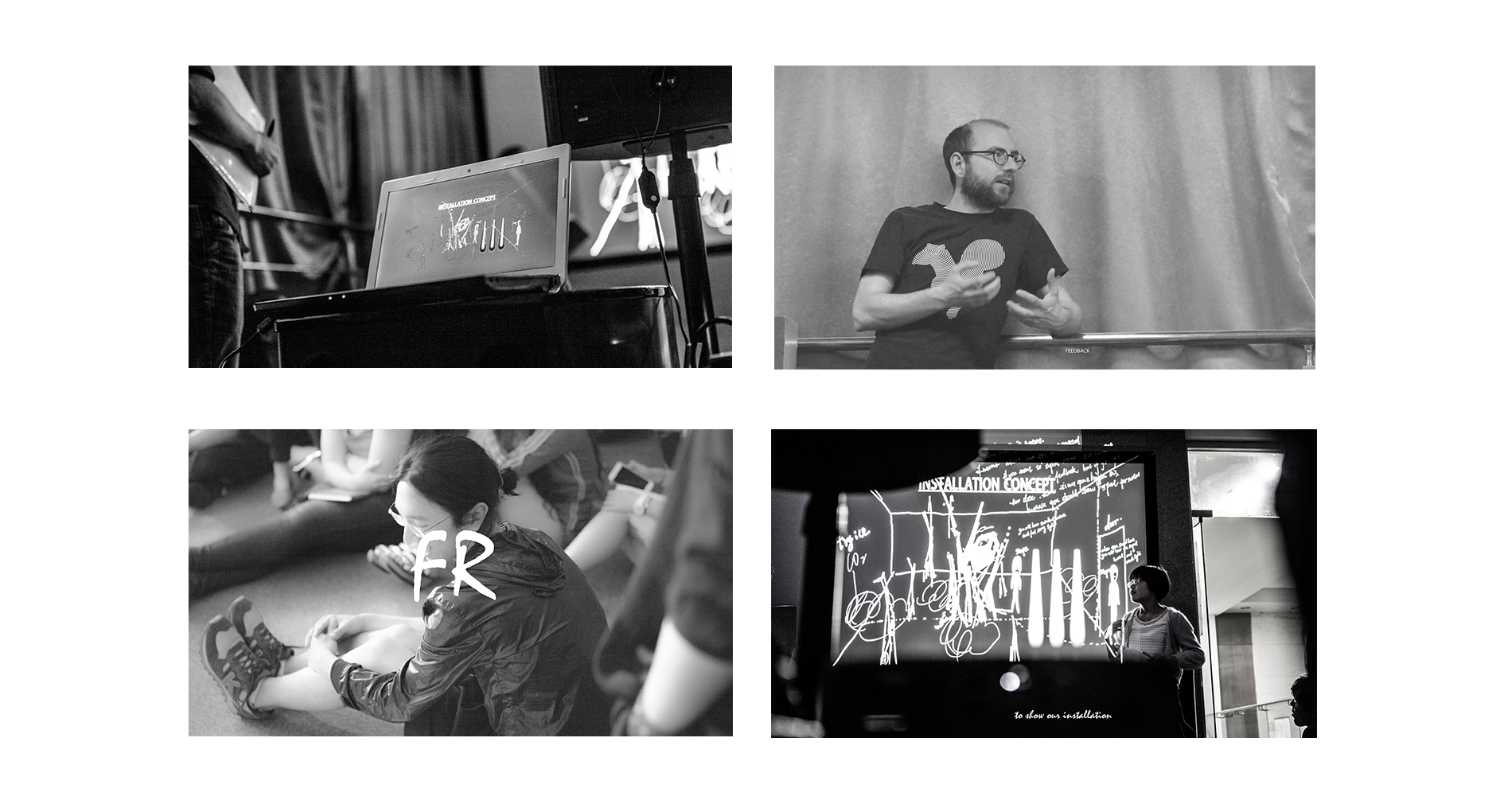 During the presentation, I demonstrated several thinking processes regarding the optimization of ideas, the design of the materials, the construction of the space and the calculation of the budget. Luckily, I got positive responses.
As for space, it was set in a corridor-shaped gallery so as to create the sense of immersion. We designed the pathway paved with leaves on the road, the scent of leaves and branches and the white noise were set in order to deliver the combination of visual, auditory and tactual experiences. One part of it was to associate the crispy sound with people walking on the road. Thus, listening to the sound, the audience would walk through the path with great care, approaching the nature gradually. Of course, we also have designed more in-depth interacting experience related to the topic. 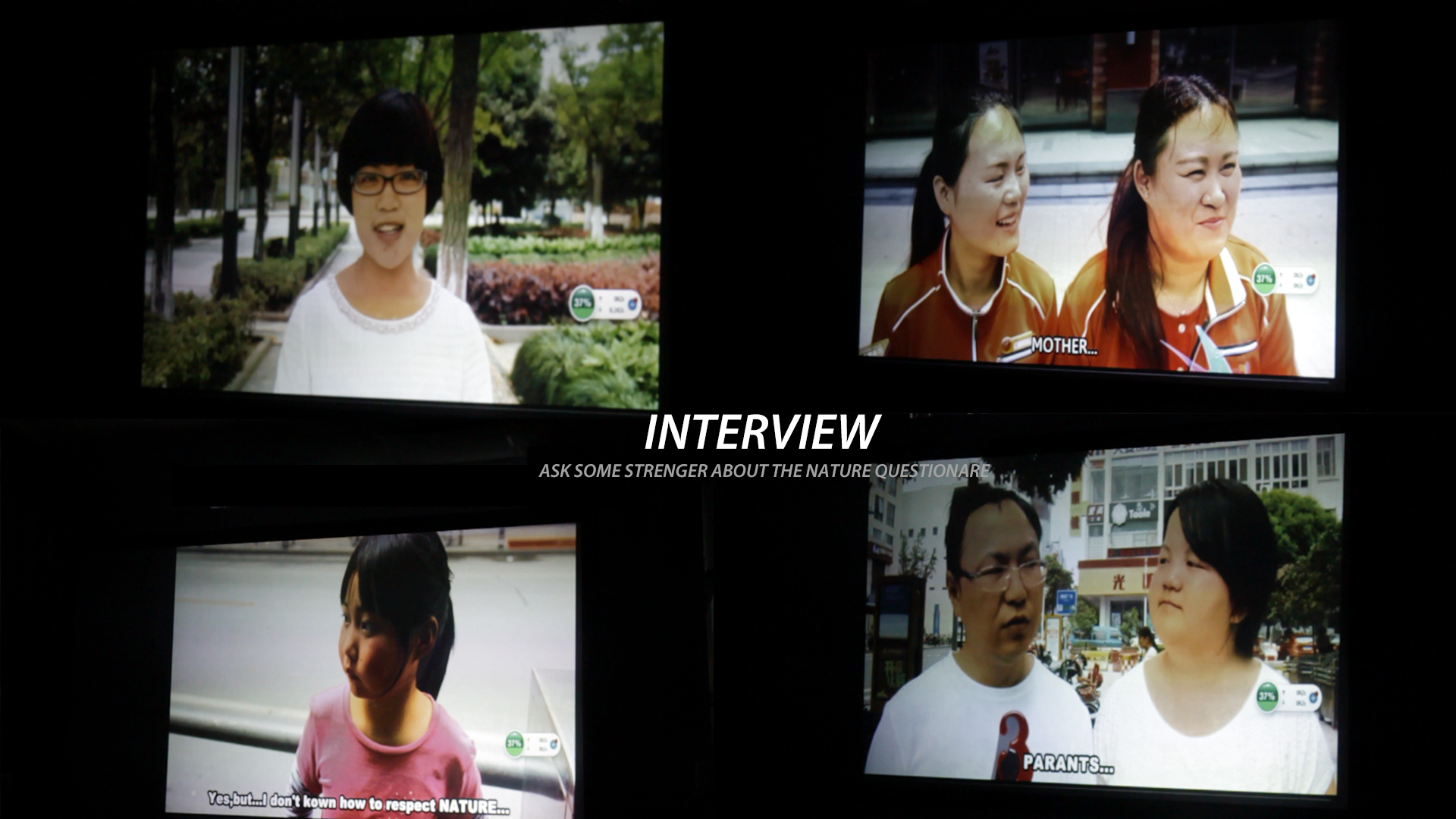 The statement involved the interview we conducted. We had pedestrians interviewed about who they respected most, how they show the respect and the reason for that. And also their opinion upon the nature and how we should respect the nature. 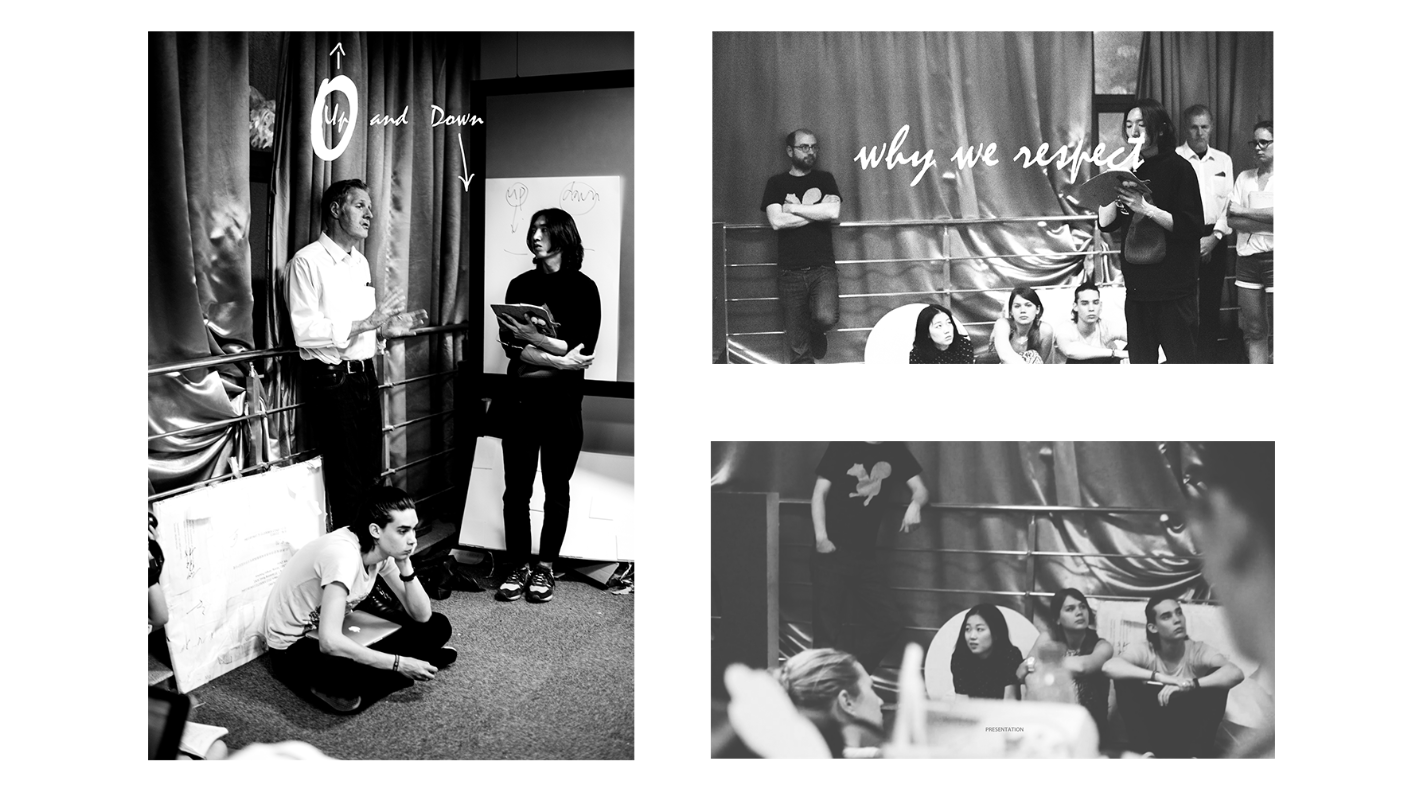 The teacher gave us advisable suggestions about our installation and the whole stage set. In the first place, I wanted the audiences to automatically behave respectfully with sharp objects hung above rather than using leaves on the road. But in consideration of the fact that it might get too dark for the stage, I decided to use a simple but direct way.

Here, I’d like to describe the course of the presentation. First, audiences will enter into the stage as if they are walking into a corridor. The rectangular shape brings a sense of mystery and peace. Audiences will hear the vacant voice of the nature and some heart beating. When getting close, the white noise arises, creating an illusion that they are in a nature status. At the same time, the scent of leaves and the creak sound of footsteps draft, which forces them to walk with great care (the great care generated from the Confucianism concept means that people will have the consciousness following the action, which is respect). But if the audiences are too close to the installation, closer than the safe distance, the nature will respond with a warning to drive them back. Then the warning will turn to the sound of thunder, much like a breath and a real thunder happening. The thunderous sound here signifies the totem of the nature. ![](/content/images/2015/08/PREZENTATION4-1.jpg) 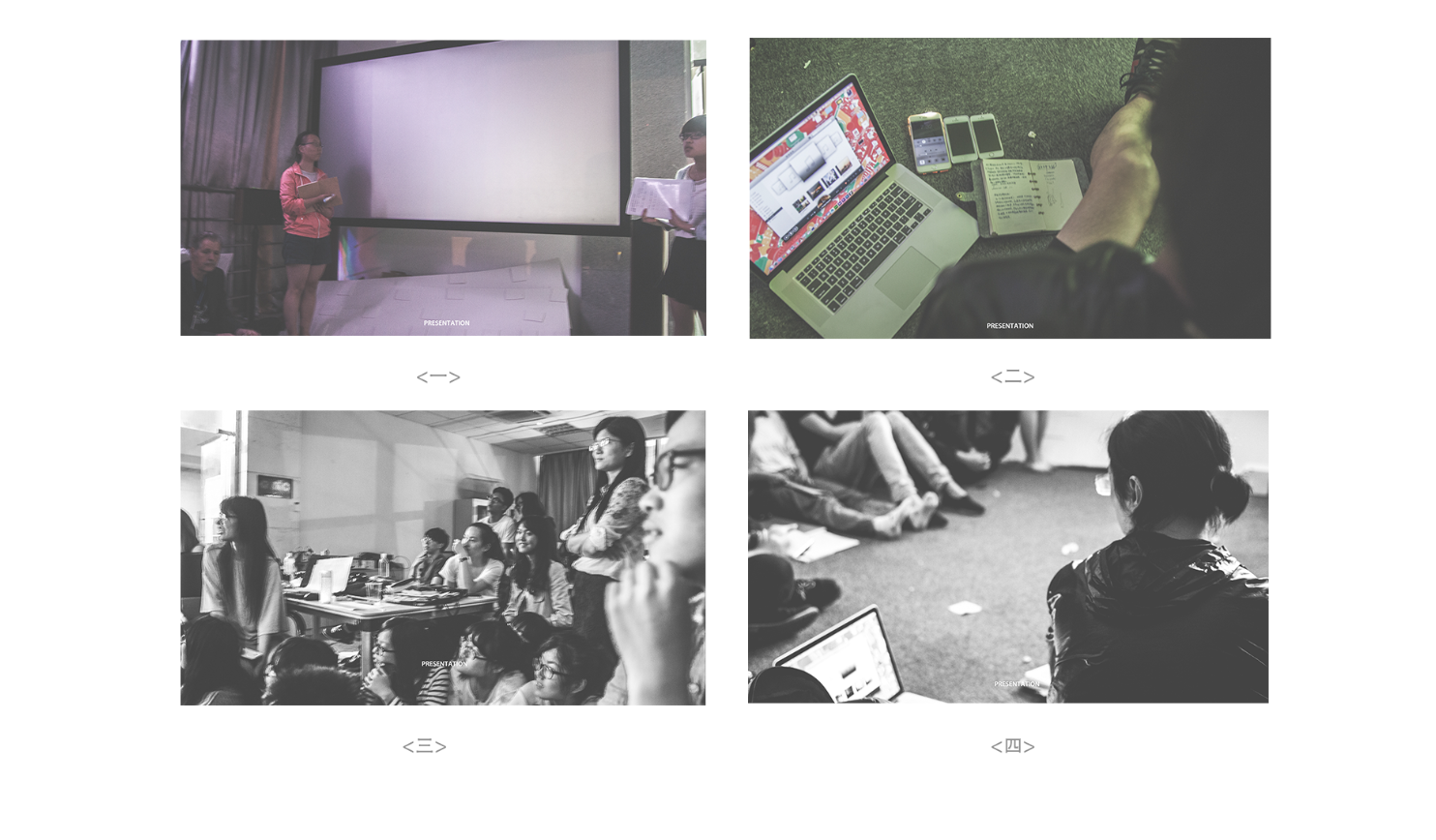 One benefit of doing the presentation was to draw on the wisdom of the masses and to discover the strength and weakness of our installation. 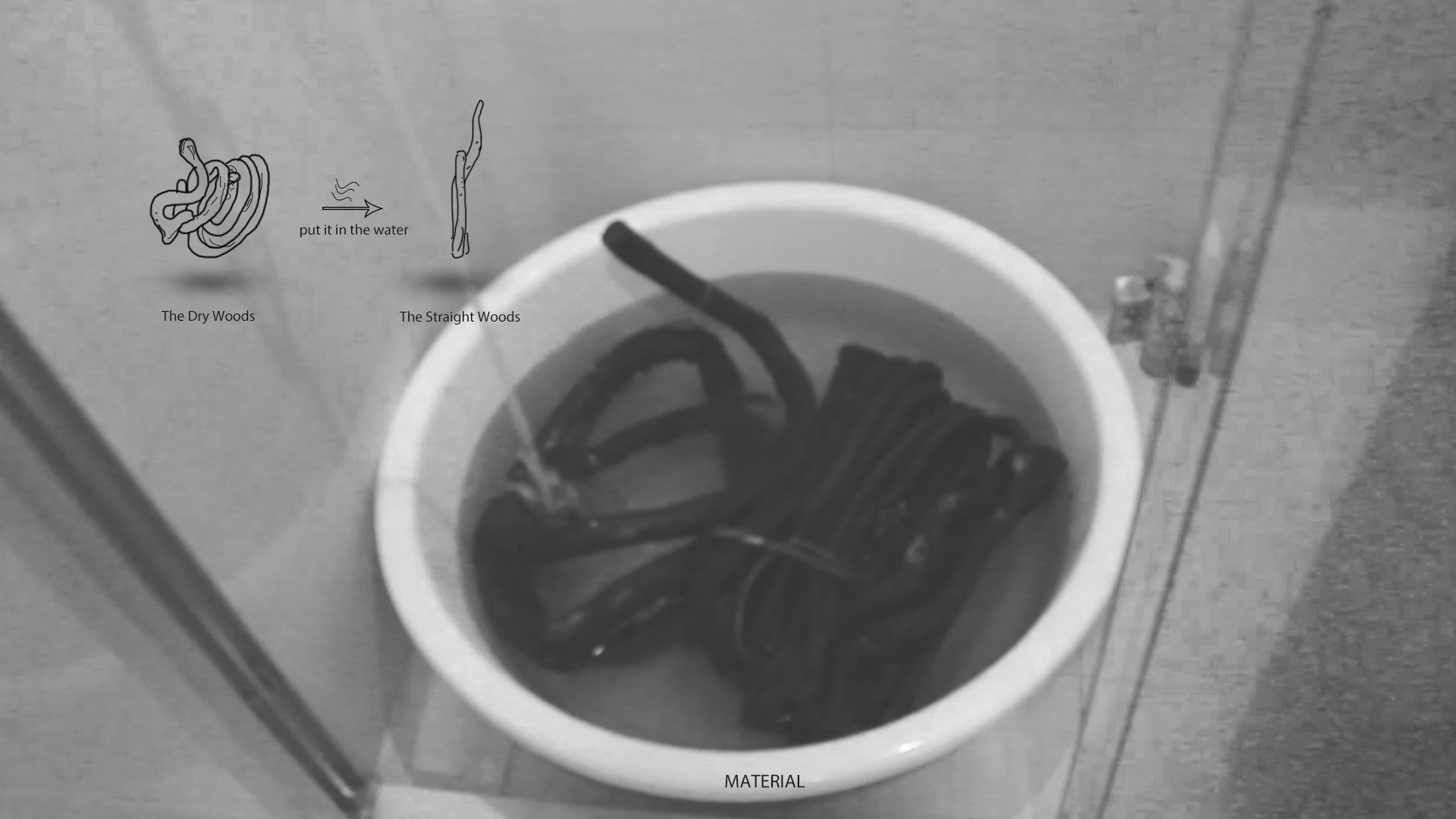 It was important to soak vines in water and dry them under the sun with iron wires to finalize the shape; otherwise it would have strong smell.

The major materials such as the dead vines and some others for test and adornment use were purchased from the commercial mall in Wuxi City and the construction material market in Taicang. 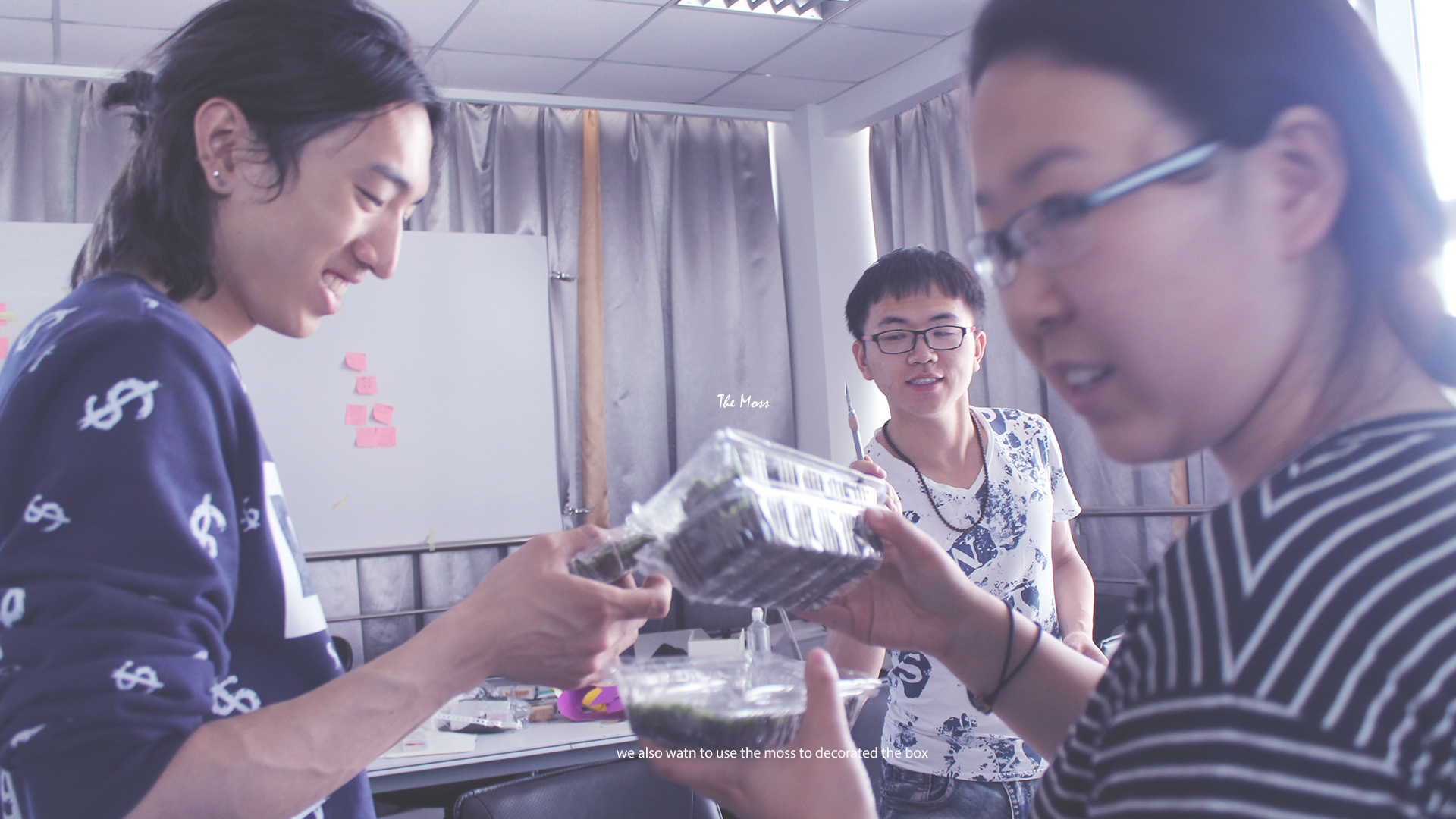 And we bought moss, crystals and dry ice online. Due to the physical properties, taking volatilization of dry ice for example, we had to buy such materials one day before the exhibition and put them on the stage half an hour before the presentation. 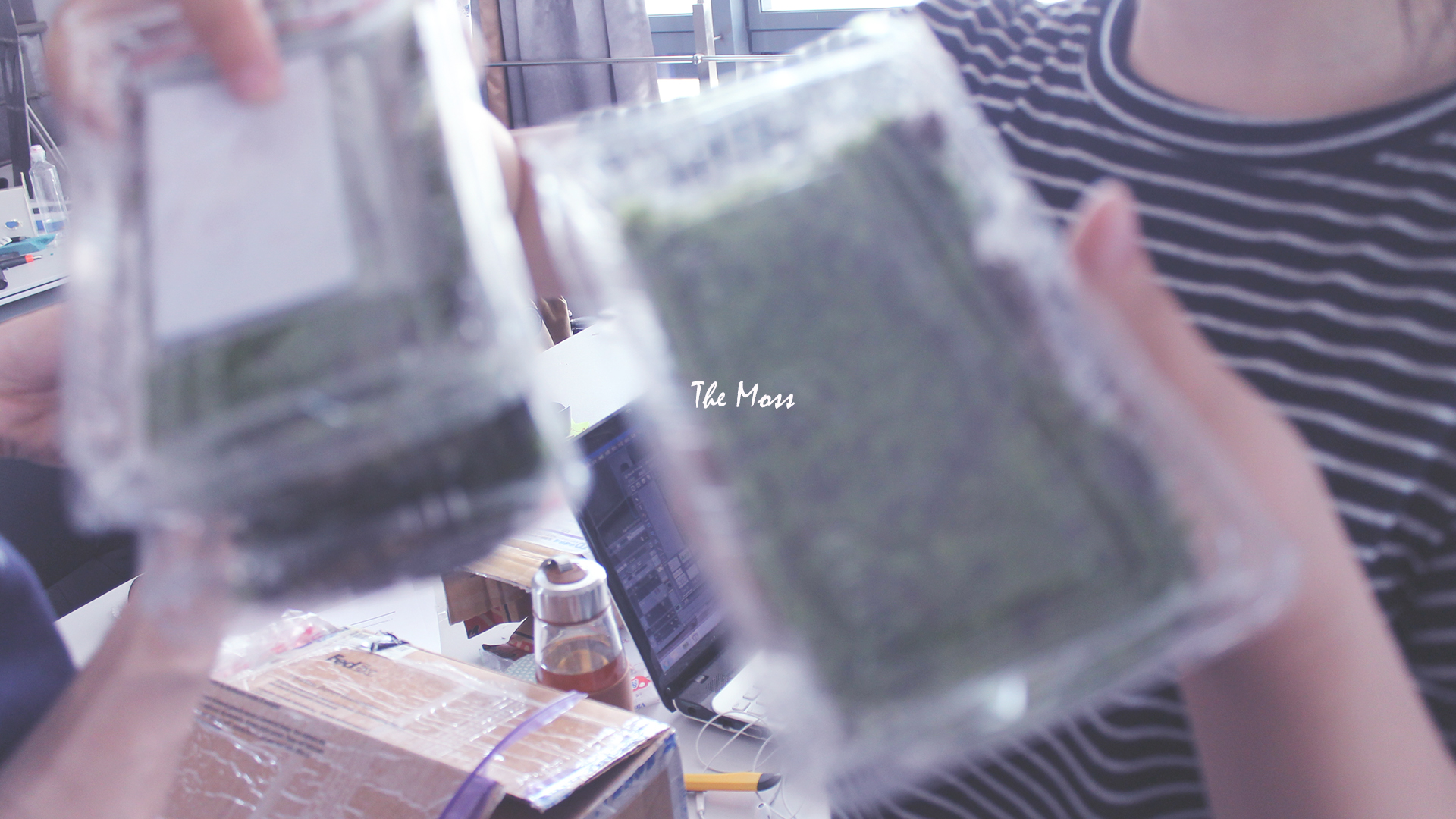 We bought some LED lights and wires and directly tested them in the construction market. And we also bought the transformers online and connect the whole circuit by ourselves, which was a tough task. 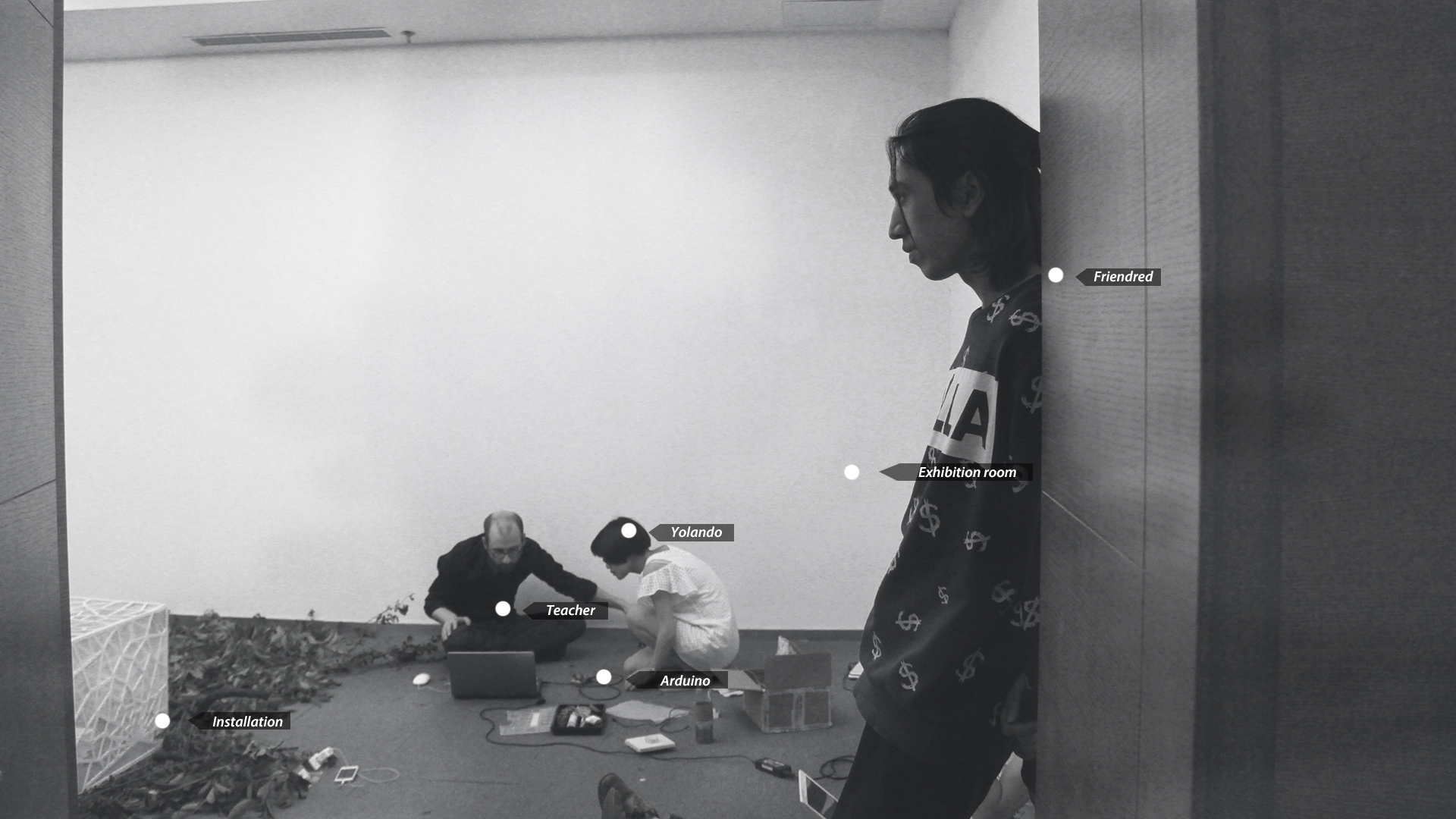 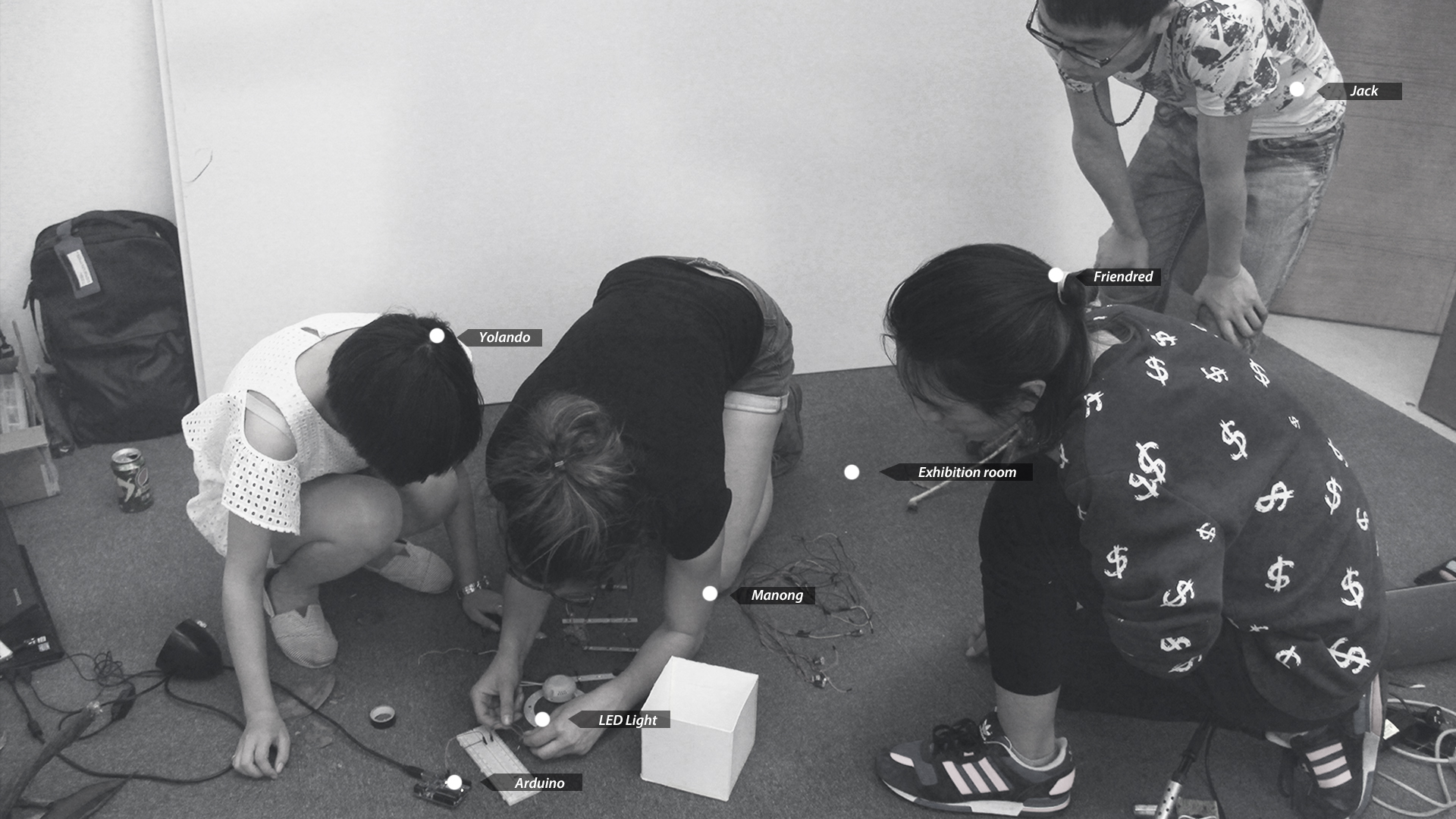 One night before the exhibition, I stayed up late with Yolanda at the gallery, fabricating the interaction between sensors and voices. We were planning to go back to the dorm in the morning and clean ourselves. But it turned out that we didn’t get a chance to wash our faces and we didn’t get to sleep until the next day. We started the presentation without even fixing our hair. But fortunately, we finished the work for interaction. 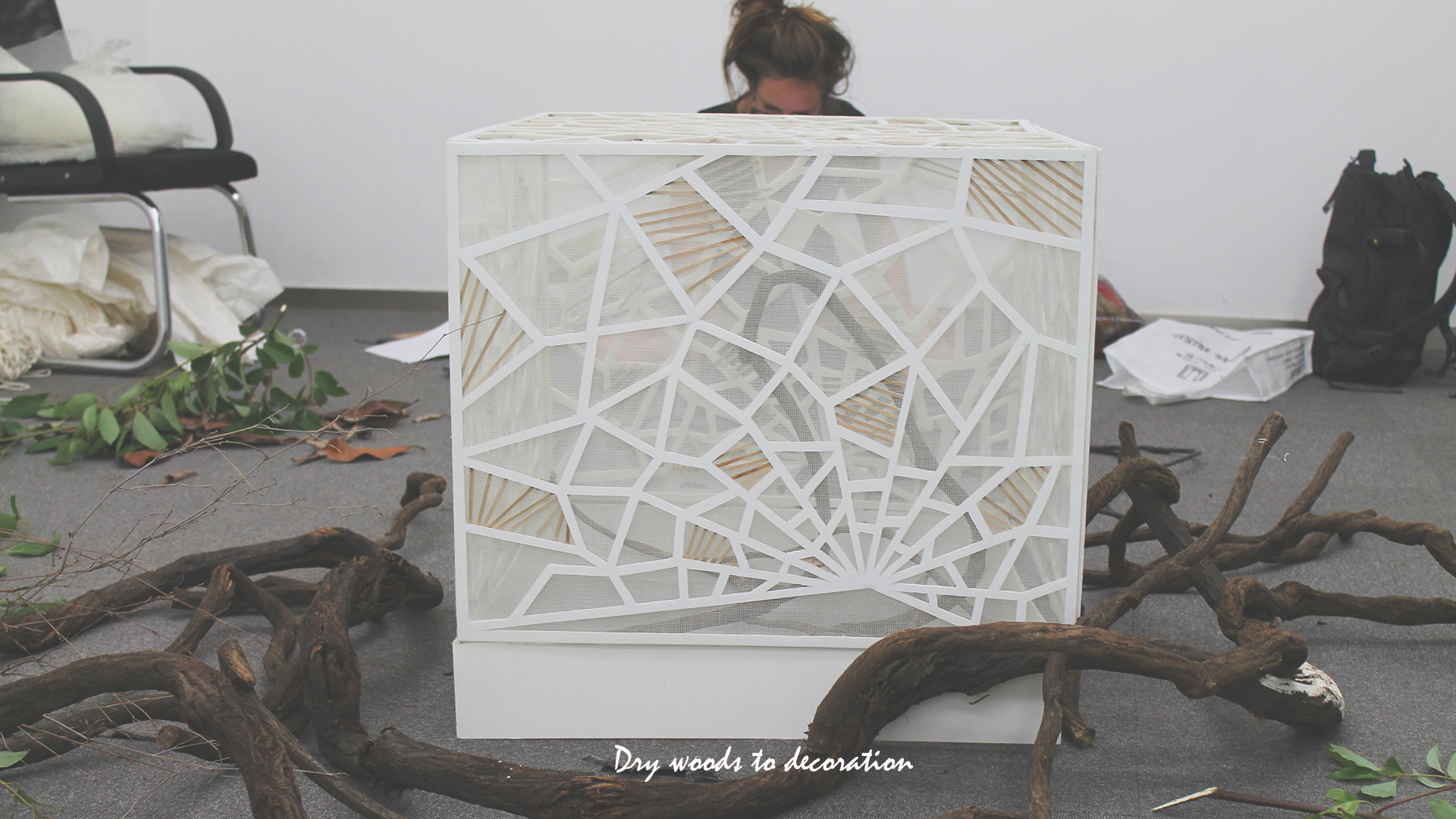 Coupled with the vines and the installation, the box spread the taste of the nature. The engraving part of the installation was set with a crystal to create the defocus and projection effect. Plus, the smoke resulted from dry ice allowed stage effect of rising mist.

The two pictures above were the defocus and projection effects of the crystal we tested. 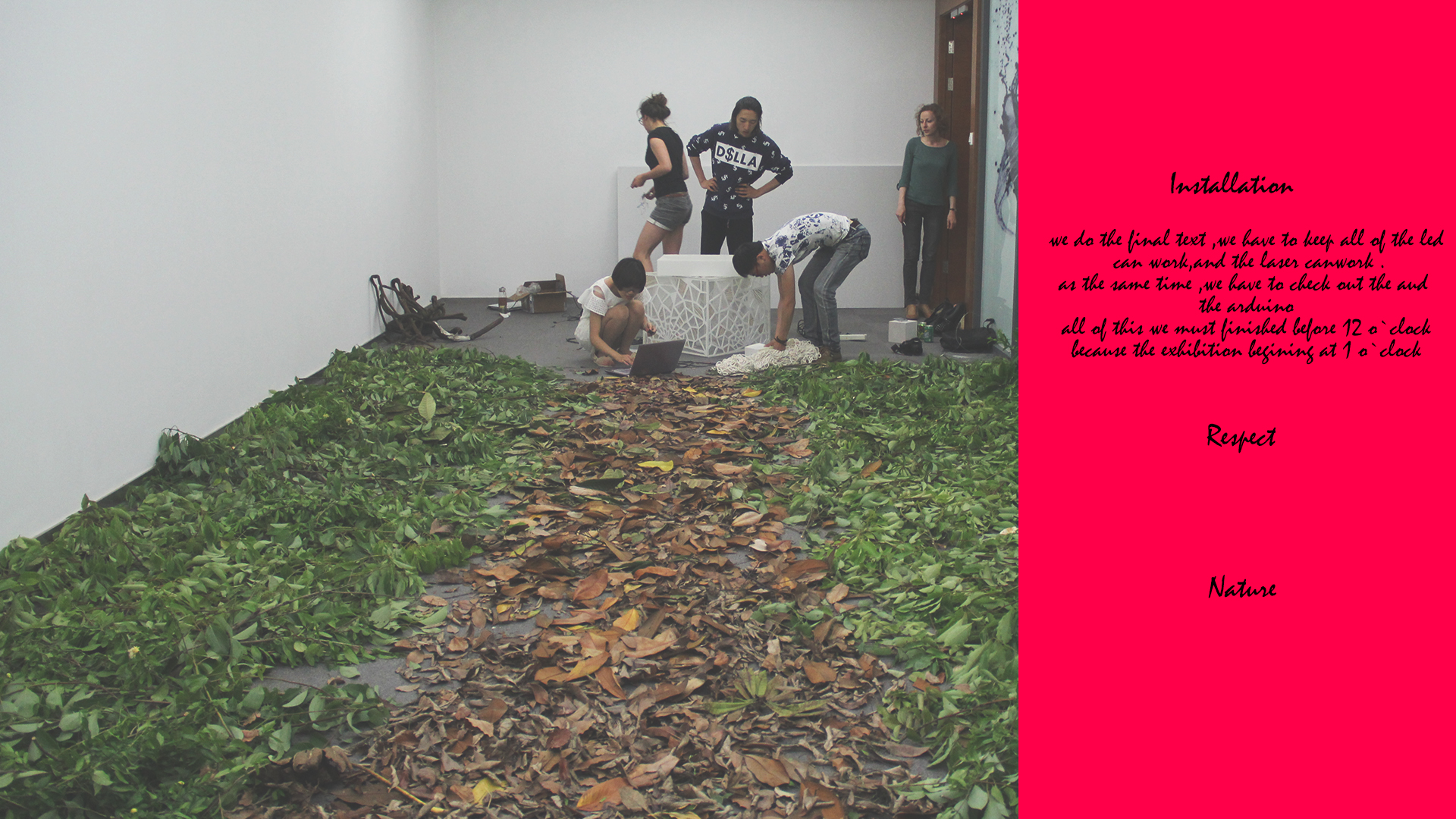 The last step was to clean the field before the exhibition and spray the aluminum powders on leaves and dry ice around the installation.

Welcome to our exhibition 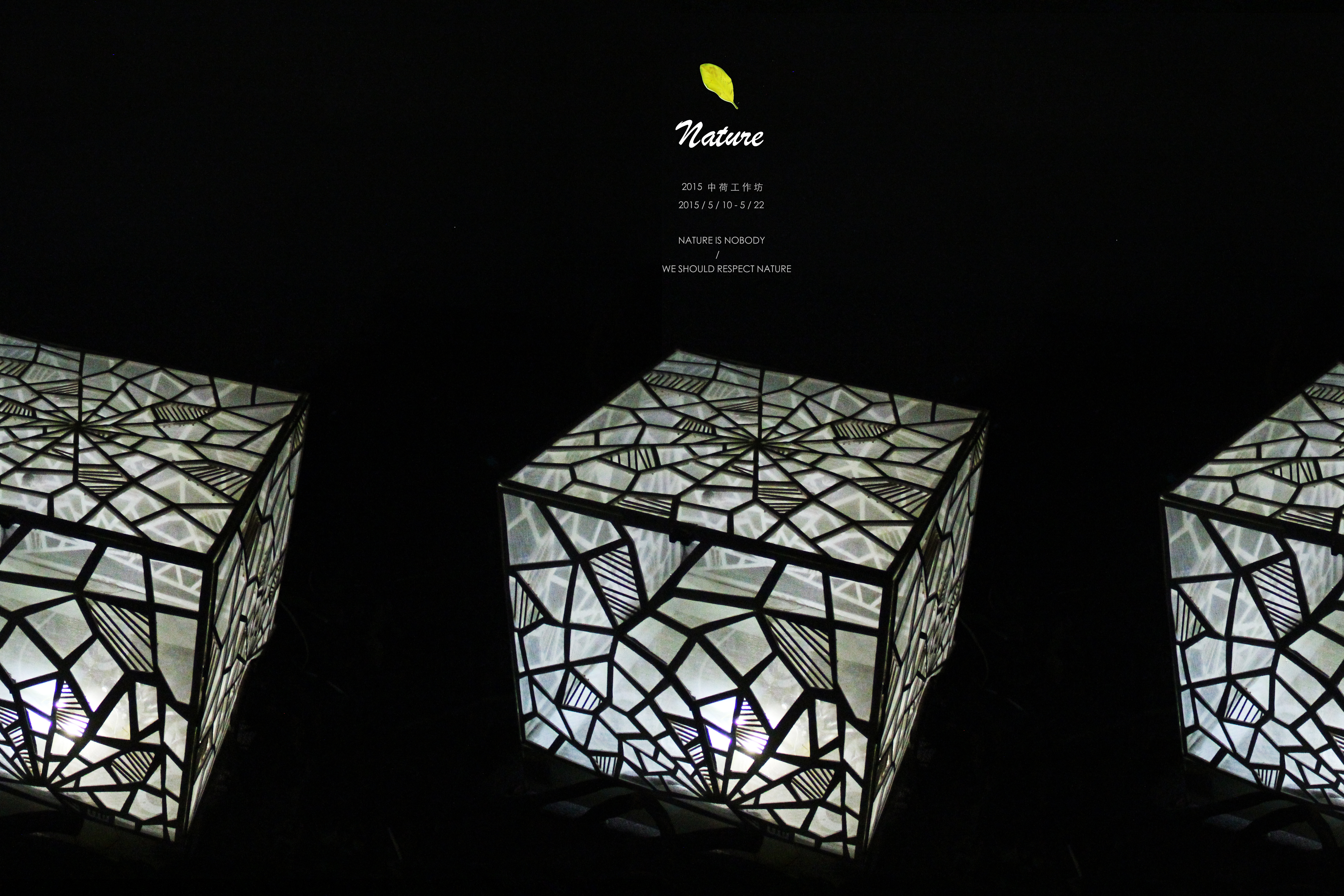 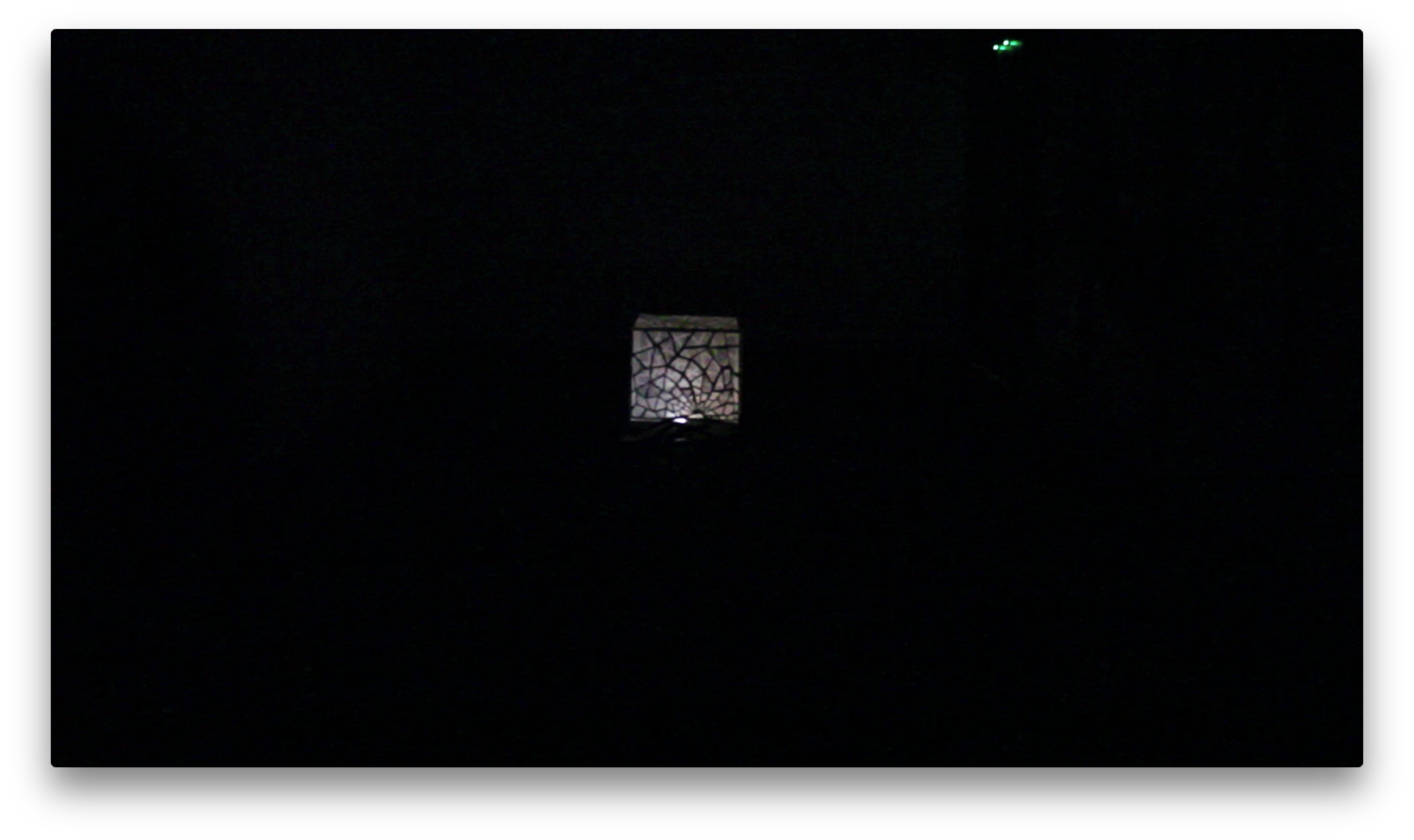 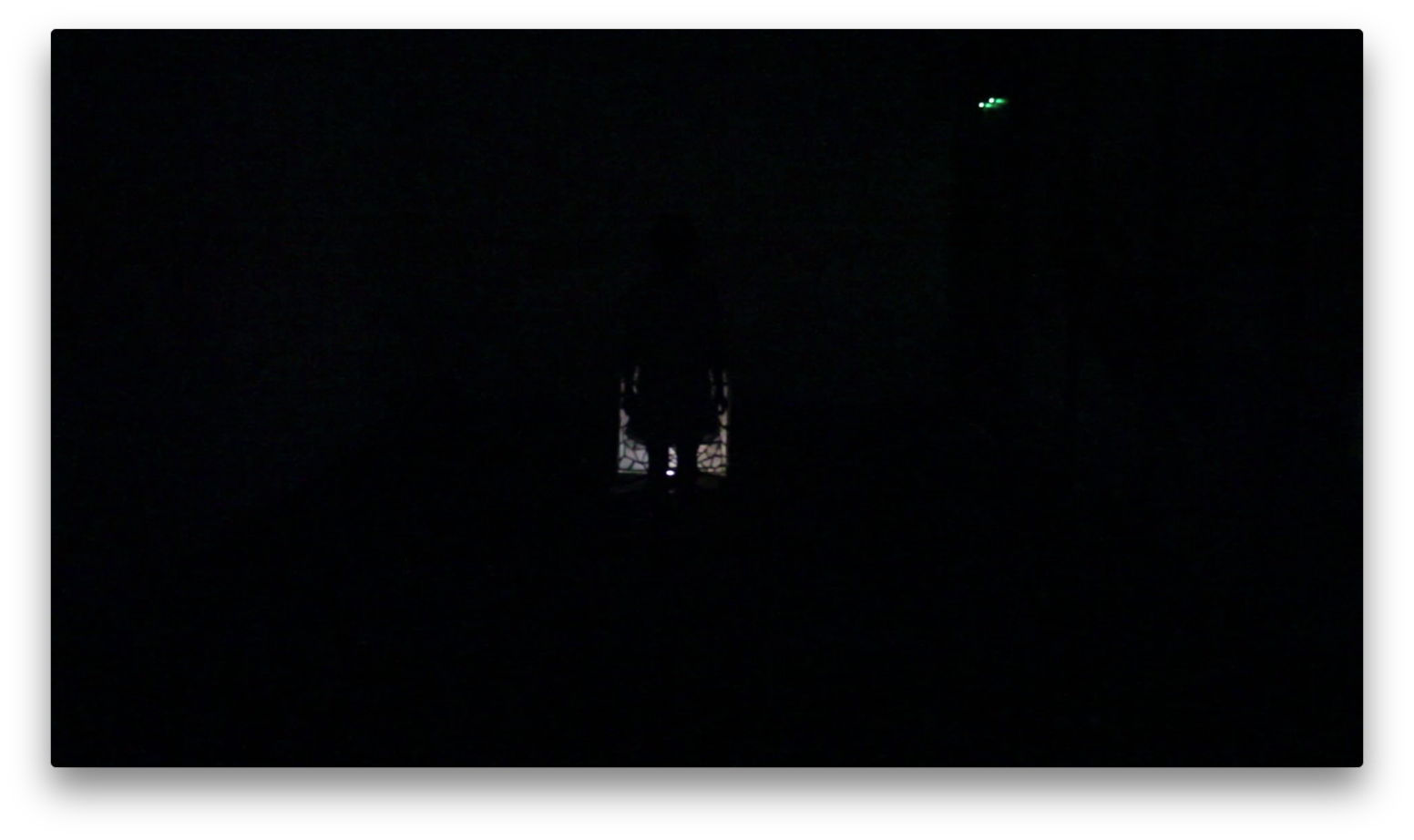 When you are getting closer, you will notice the white noise and smell the scent of the nature. The light will get stronger when you are approaching the nature box. Because when you are on intimate terms with the nature, each component of the nature becomes stronger. Creaking on the leaves, you will automatically behave in a respectful manner so that there are less creaks to ruin the harmonious environment. ![](/content/images/2015/08/Snip20150606_4.png) But if you are too close, closer than the safe distance, the nature will respond with thunderous warning and lights to drive you back. Since there is a respectful distance, beyond which you will be required to return because the nature will be disrupted otherwise due to your intervene. 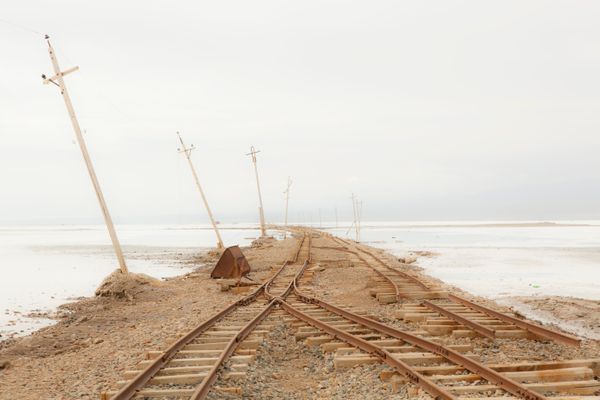 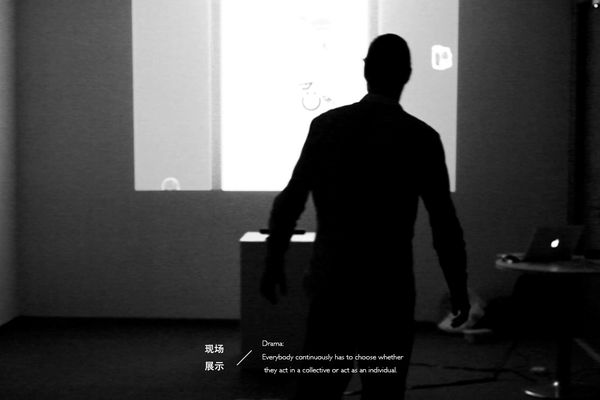 WHO YOU REALLY ARE<INTERACTIVE MOTION-SENSING DEVICE>