This work is a dialogue between Shader and reality. The metamorphoses that occur when touching the screen can raise people’s fragility about the boundary between dematerialized Shader and the actual screen. The screen can be regarded as a spectrum of the experiencers volatile emotions, distorting the limits and immersing the spectator into a short detachment from reality. Nothing is an uncounted experience, creating an immaterial boundary is the process of people wandering their hearts. It all starts with the screen seducing you to interact with it.

In total, there are 8 different scenes, which all express lexical distortions of shader and real life, blurring the boundary and submerging the audience into a ‘transition’ environment via mediating the invisible depth that is captured by infrad camera.

In the first scene, which triggers when you put your hand in the left top corner, the iridescent metamorphosis will become blurred and there will be less and less wrinkle effect. By contrast, if you press your hand slightly towards the right, it will show a peristaltic and dynamic drape effect. In the second stage, the ripple will follow the position of your hand as long as you press the screen. It will go back to it's original place when you release your hand. If you use both hands at once the Kinect will detect only one hand at a time and a flickering ripple will jump between your hands. In the third scene, the interaction behavior is simply sliding the hands between the left and right corners. Then you will see the cloth wireframe flutter slightly with your hands orientation. In the fourth scene, moving black and white stripes will induce vertigo. If you push your hand, or whichever part of your body against the screen you can slow it down and control the vertigo. Also, the middle part would become the largest concentration of stripes. If you move your hands towards the left side, you will make a cluster of intensive lighting stripes on the right side and vice versa. In the fifth scene, the interaction is an overlapped ‘computational glitch’ that grows from a distance in accordance with your position. The glitch shows up in the right of the screen if you touch the left area. In the sixth scene you need to pick a place on screen and press it. A hole will come out fast if you press it hard. In contrast, it will stop or slightly come out if pushed lightly. The intensity of the force applied to the screen effects the output. Scene seven explores the spatial and temporal interaction with the screen. The matrix will transform from stable to volatile, depending on where your hand is positioned along the width of screen. For scene eight, I used opencv to find contours. To be more specific, I get the central position of a blob, transfer these numbers to a particle system and draw several polylines. Unlike the other scenes this one can be triggered, by the user, from multiple positions at the same time. 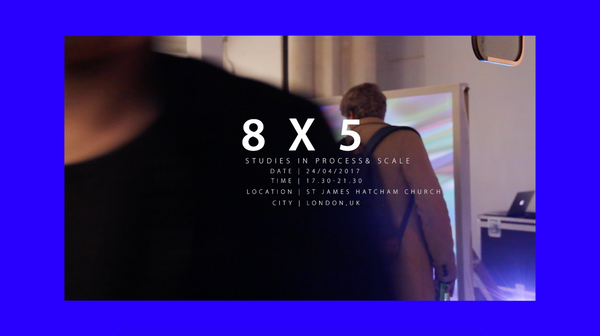 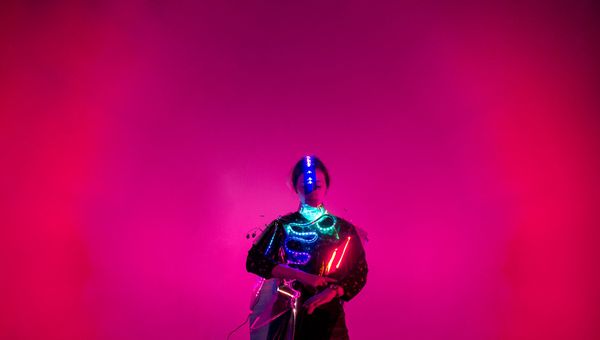